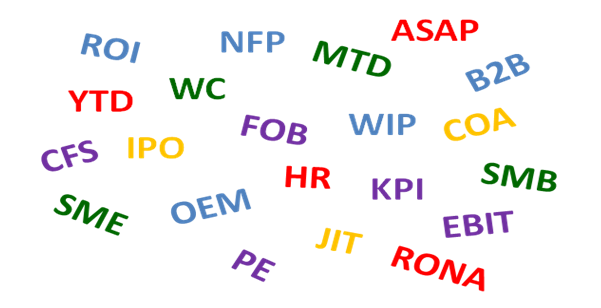 Instead of continuing to speak in a completely different language, consider making your content acronyms free zones.

An acronym is a word or name formed from the initial components of a longer name or phrase, usually using individual initial letters, as in NATO (North Atlantic Treaty Organization) or EU (European Union), but sometimes using syllables, as in Benelux (Belgium, Netherlands and Luxembourg), or a mixture of the two, as in RADAR (Radio Detection And Ranging). Similarly, acronyms are sometimes pronounced as words, as in NASA or UNESCO, sometimes as the individual letters, as in AFP or ATM.

Don’t over-complicate your content, making it challenging and draining trying to understand where acronyms are best to use.

Eliminating acronyms should limit interruptions because someone doesn’t know what you mean.

Put everyone on the same page, instead of losing people because they don’t understand what you are trying to communicate.

Acronyms are often overused to give you the ability to streamline communication. However, overuse can do the exact opposite. It’s safer to keep the conversation simple and to the point.

You might know what you are speaking about and mean, but does it always translate to everyone, or lead to a communications break down.

We’ve all seen eyes glaze over with the look of utter confusion. When speakers use unfamiliar language, boredom quickly soon sets in. It is mainly so in meetings where people want to respond and make decisions.

By way of example, be aware when talking to governments. The first thing you notice is you don’t speak the language, and you struggle to follow their instructions and conversations.

“I don’t worry about GDP. Not when there are so many other combinations of letters to be concerned with”. Jarod Kintz

“BRB, TTYL, OK? Wow, I saved a ‘ton’ of time with these acronyms”. Stephen Colbert