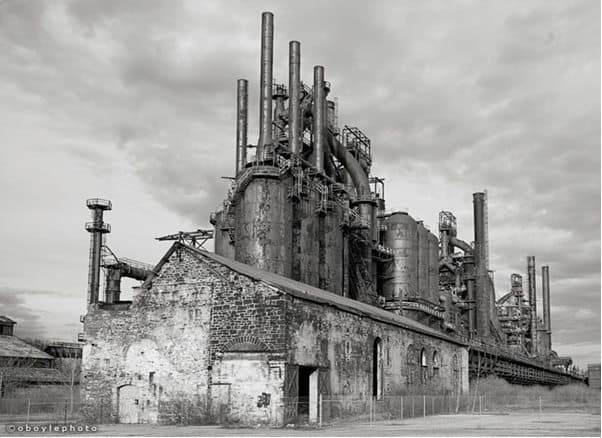 Bethlehem Steel Corporation was America’s second-largest steel producer and largest shipbuilder. Bethlehem Steel and a subsidiary company, Bethlehem Shipbuilding Corporation were two of the most potent symbols of American industrial manufacturing leadership. This is the story about how they were introduced to the humble To-Do List, and the impact it had.

One day there walked into Schwab’s office a Harvard-trained management consultant; one of the world’s first; a man named Ivy Lee. Lee said to Schwab. “Mr Schwab I believe our organisation can show you how to run you steel mill better”. Schwab looked at this man for a moment and said. “Look I know how to run this steel mill better than I already run it. You see I am not doing as well now as I know how to do.

So I am not going to pay you a fee for you to give me more techniques for doing things better until I have got done all the things I know I should do better. But if you will provide me with the idea that will enable me to get done more of the things that I know I should do, I’ll pay you any reasonable fee you ask.”

With that, Lee thought for a moment, and he said ‑ “All right, Mr Schwab. If I give you an idea right now that will enable you to get done more of the things that you feel you should do, will you try it for as long as you feel you need to prove its value to you. When you are satisfied that it works, pass it on to your key employees and then at the end of 3 months will you send our firm a cheque for what you feel the idea has been worth to your Company.”

He said, ‑ “Well what is the idea?” Lee pulled out of his book a foolscap sheet of paper, handed it over Schwab and said ‑ “Now Mr Schwab will you write on that sheet all those jobs that you feel you could do or should do to run your organisation better. Now take your time ‑ I will wait while you do it.

“With that Schwab looked at the paper for a moment, though, jotted down an item, thought about it again, wrote down another and another. It took him about 10 minutes to a quarter of an hour to get listed all the items that he believed he should do.

With that, he looked up. Lee then said ‑ “Mr Schwab examine that list and ask yourself this question…`If I could only get done one of those tasks this month which one would it have to be?’ Figure it out and number it ONE. 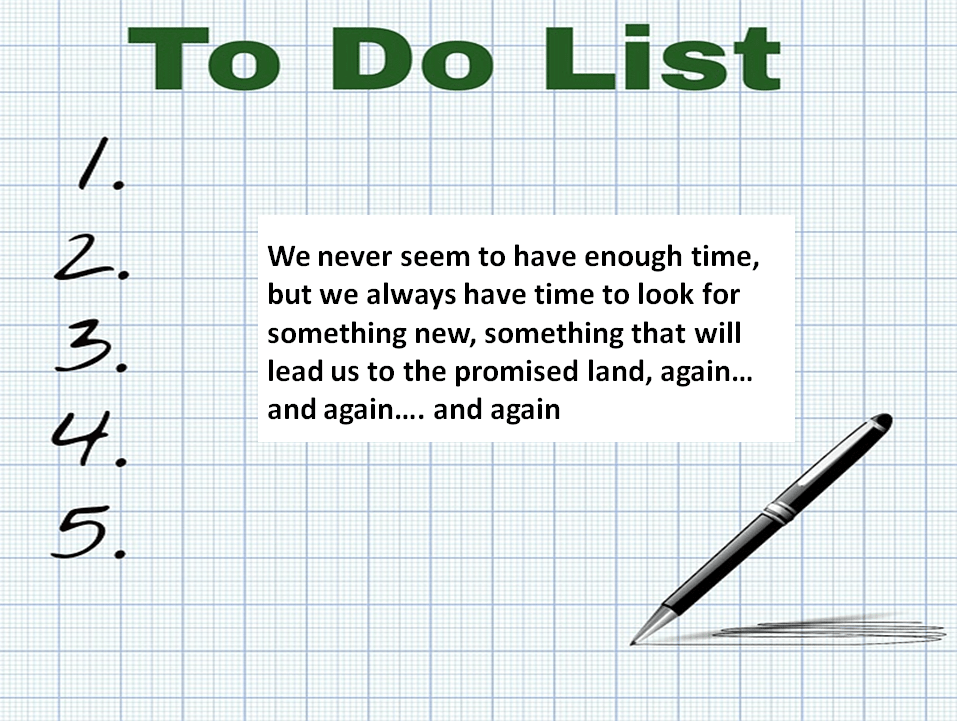 Like many of millions who have benefited from this great tool, so can you.

When you have done that, ask the question again ‑ `If I could only do one of these remaining tasks this month which would it have to be?’ Figure it out and number it 2. Then ask it again and number the next 3, and the next 4. Keep asking that question until you have numbered every item on the list.” Schwab proceeded to do that.

Lee sat quietly across the desk. Schwab finally finished and looked up. Lee said ‑ “Now Mr Schwab start working on No 1. And it doesn’t matter how many times you are interrupted by an emergency, a crisis, a routine matter or some detour. The moment the detour is overcome unerringly back to the next item on the list still has the highest priority.

You may find your priorities will change

If they do, be quick to alter your numbers: it will only take you seconds to change your numbers but always work according to a numbered list. You may not get through many of these items today or this week or this month, but I will make you a promise. “AT THE END OF A YEAR, YOU WILL HAVE ACCOMPLISHED MORE BY THIS METHOD THAN YOU EVER COULD BY ANY OTHER METHOD”.

Charlie Schwab was rather disappointed ‑ he hoped to get some sophisticated management system, and all he got was a simple numbered list. But he didn’t have a better idea so decided to try it.

At the end of about 2 to 3 weeks, Charlie Schwab found he was making real progress with several projects that he had never previously got started on. He found his level of well-being was very much higher. Why?  Because he had overcome the normal oversights and omissions that creep into the working day.

Charlie Schwab then made it compulsory for every employee in the organisation right down the line to a little above labourer level to carry in their pockets a card, and on the card the men were expected to have all their jobs listed, numbered and were expected to work on them in the order in which they had numbered them.

Schwab was known to walk around the plant, go up to a man and say ‑ “Excuse me, could I see your card please?” Woe betides the man who didn’t have a list, didn’t have his jobs numbered and wasn’t obvious to Schwab working on the item that the employee had indicated had the next highest priority.

A significant factor in any organisations level of well-being is the average well-being of all the people who make up the team.

Now, this looked to be a pretty restrictive arrangement until it was noticed at the end of a few weeks that everybody had a greater sense of accomplishment. Men were getting more done during the day and were liking themselves better for this. They had largely eliminated unnecessary retraced steps, errors of oversight or omission. They went home at night and liked themselves better. The men came to work the next morning with fewer incomplete tasks hanging over them.

Every organisation has a level of well-being; you can pick it up the moment you walk through the door. You get an atmosphere from the demeanour of people. The look on their faces, the spring in their step or the way they sit at their desks. All this conveys an indication of the level of well-being of the team.

Charlie Schwab, by causing men to list the things they felt they should do, put priorities on them and follow through on those priorities, had succeeded in lifting the entire average level of well-being in Bethlehem Steel. He had done the men a great favour by helping to largely eliminate their goal failures on the job by making maximum use of the `minor goal success ‘ principle.

Charlie Schwab built Bethlehem Steel in a small number of years from that date to become the world’s largest independent steel maker. Schwab was then appointed General Manager of the then world’s largest company, U.S. Steel. During his period with U.S. Steel, his salary increased to the point where he was paid one million dollars a year salary. It made Schwab with Walter Chrysler the two highest paid men in history.

He wrote a letter to Lee, and it said in effect ‑ “Dear Mr Lee, Enclosed is our cheque for $25,000 the value that we have put on the idea of the numbered list that you gave me three months ago. I wish to state that from a money standpoint this has proved to be the most valuable idea in my business experience.”

Shortly after joining U.S. Steel, Schwab made a speech one day at a glittering banquet in New York attended by a thousand of the top industrialists in the United States. In it, he traced the histories of various organisations in the steel industry. He referred to many little anecdotes from his days with Bethlehem Steel, and one of the stories he told was of the visit of Ivy Lee the consultant and the idea for which he paid Lee $25,000. Then he said a very surprising thing. He said, “Gentlemen: I believe one of the major contributing factors why Bethlehem Steel became the biggest independent steel maker was the use of this numbered priority system”.

People will be sceptical

Many men in that room hearing Schwab at that point knew that couldn’t be right. They knew the real reason Bethlehem Steel had become the world’s biggest independent steelmaker. They had come up with a technique of making better quality steel, making it in greater quantities and then selling it at lower prices than their competitors.

Charlie Schwab who was very sensitive to atmosphere picked up the mental rejection by some men in that room. He said,  “Gentlemen”. The reason why we found the time to research steel quality that so many of our competitors were not finding time to do.  And the reason why we were able to organise ourselves to make it in greater quantities and then be able, because of that, to sell it at lower prices was simply this.

Every time any one of our key people thought of an action that they felt they could do or should do, they scheduled it. They put a priority on it. Then as far as it was humanly possible, followed through on that priority”. He said ‑ “Gentlemen: that is why we became the world’s largest independent steel mills”.

What Charlie Schwab had succeeded in doing was he had lifted the entire average level of well-being of all the people who made up the force of Bethlehem Steel.

I am often asked, “How do you manage to get so many things done?’  Well, I have a lot of hobbies. I have been to a lot of places in the world, I enjoy a lot of things, and I have a business to run. It means I have to get a lot of things done and be efficient and effective at the same time.

Today, I still enjoy my own time doing things I love doing. Sometimes I get ribbed because I spend so much time on my business. Whereas in reality, it is not as much as an outsider would think. I attribute this directly to managing all my activities with my electronic to-do list.

I certainly know many people who think they are using a to-do list, but are failing to maximise its benefits. You must start with a prioritised list of the things which will have the biggest impact on your business, not just a ‘shopping list’. Restrict you list to 5-10 itrems per day and avoid being stressed and overwhelmed.

“Sometimes our stop-doing list needs to be bigger than our to-do list”. Patti Digh
“Rename your “To-Do” list to your “Opportunities” list. Each day is a treasure chest filled with limitless opportunities; take joy in checking many off your list”.  Steve Maroboli
Posted in Management, Action, Operations, Planning, Start-up
← Future rethinking delivers opportunities.Structures usually inhibit progress →