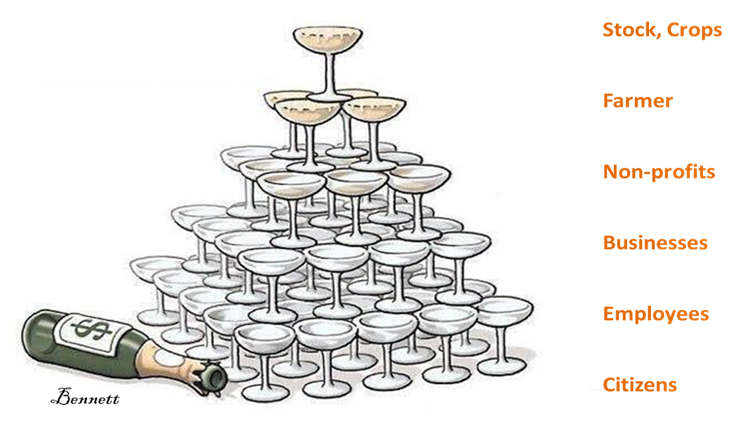 Why are governments so obsessed with non-profits, when those who generate jobs and ideas for their communities but are disqualified from funding grants because of inappropriate policy settings? Is making a profit still a dirty word? Why should businesses spend their earnings helping their communities when governments won’t help them? Trickle-down economics is not a sound strategy.

Governments want to create jobs and support people in a drought?

They want to create more jobs and to give people an incentive to work, to invest in their businesses and communities and to employ people and create better lives for themselves. That is what they think they are all about, but all too often their rhetoric is not backed up with appropriate action.

Unfortunately, governments are city-centric and have little understanding of drought and flooding rains and even less knowledge about how communities, their businesses and non-profits work. Many obviously believe plenty of photos and autoresponders to communication is doing the job.

The Country Party, then the National Party, which we believe was a bad move, was set up to leverage the votes of regional and rural people to ensure the development of non-metropolitan Australia. In reality, it has been a spectacular failure. Metropolitan cities are now bulging at the seams while country towns continue to struggle and export their kids to the cities. The pattern has remained unchanged for a century.

Until regional, rural and remote Australia can elect a bigger bloc of MPs with the right experience and understanding to reverse the flow, Australia’s capital cities will continue to suffer under the pressures, while country towns and villages continue to die and ideologues continue to gain control of our local governments. Just keeping the seat warm should not be an option.

We were so excited when you were elected Prime Minister, and we think you are doing a great job, including your speech to the Bureaucrats in Canberra last week, handling the Pacific Islanders, Vietnam and many more in Paris. Unfortunately, our recent experiences with politicians and bureaucrats have left us disillusioned. There is no sense of urgency?

Over the last ten years, we have created very extensive materials to help people in drought-affected areas while improving health and other types of services delivery. Materials which are reliable, practical, useful and helpful for people in our towns and villages.

Would you believe we can’t get appropriate assistance to help roll it out to where it is most needed, including visits to communities and follow up support services? This is despite the many favourable comments we receive from people who see our work.

How can politicians and bureaucrats get the policy-settings right when they are obsessed with so many unimportant things. They are obsessed with non-profit organisations and are too risk-averse unless it is to their benefit or that of the public service. It seems politicians, who should be taking charge of issues and running their electorates are too preoccupied with being re-elected, with photo-shoots and self-promotion.

People might well ask, “when was the last time a politician understood your issues and gave you a straight answer, and when was the last time you had a bureaucrat hide behind ‘government policy’ when spending taxpayer’s money? As Kerry Packer famously said at a Senate hearing, “I think I know how to spend my money better than the government”.

They are always saying “I have sat down with countless small business, and I’ve talked to them”; really, how many? Moreover, how many were telling them what they thought you wanted to hear, and how many were scared of being blacklisted? How often do you listen to bureaucrats and politicians giving us examples of how well their policies are working, but in reality, it is altogether different when you’re on the ground? Transparency and accountability are lacking.

“Yes, Minister” and trickle-down economics is alive and well.

Politicians think that if their government provides incentives to business owners to work harder and invest more, by reducing the tax they pay they will naturally and inevitably use the extra money to produce a higher level of economic growth, which will create more and higher-paying jobs. It is done in a virtuous circle which they believe ends up benefiting absolutely everyone, even the disadvantaged.

How much harder do they expect people to work? Governments should be helping them to work smarter and not rely on a few well-chosen phrases to pacify the punters about how hard they are working. Australia could be awash with ideas, opportunities and money if ‘big government’ was smarter and stopped wasting ‘our’ pay by the trainloads.

Perhaps it’s time for a complete overhaul of the government and our institutions, including what and how they are teaching at schools and universities. My tertiary education took place at Hawkesbury Agricultural Collage where every subject was taught and we learned about practical application,

The College was taken over by a University who doesn’t even run the agricultural courses anymore.  and are struggling to regain the culture the College once had. Funny that you don’t find ways to help our communities. Without practical experience, people can only learn so much from books and lecturers with limited exposure to the real world in our regional, rural and remote communities which are all different.

We too need to ‘clean out the swamp’ in Australia. It seems strange that we’re being sold on the benefits of entirely discredited practices by politicians who claim to be the experts in economics.

There are too few good politicians with the right leadership credentials, and we let the back-room faceless factions get rid of the good ones, like Jim Molan. Wouldn’t it be great if we could all be on the same page and we were able to elect a better quality of politicians? No wonder good people won’t stand for elections when they see their politicians acting like puppets.

Just ask, why didn’t we start drought-proofing Australia decades ago.  The Bradfield plans were drawn up nearly 100 years ago, but no politician has had the guts to commit to implementation.

Why are energy prices still out of control, in such a resource-rich country like Australia? It is unacceptable and unless it is turned around very quickly, the quite Australians will start “rioting”, as they are in other countries? We need to become better at picking real leaders and entrepreneurs to help them to succeed. It is also disconcerting to see what is happening in our schools and universities and how the next crop of leaders could be much worse.

Getting promoted to a management role is exciting and scary. However, promotion to leadership, supervision or management brings new responsibilities, new relationship dynamics, and new opportunities for personal growth. It seems, despite the number of worldwide delegations, politicians and bureaucrats attend, new leaders still don’t get the right training and the guidance they need to be successful, and find better strategies than trickle-down economics.

“Ninety per cent of the politicians give the other ten per cent a bad reputation”. Henry Kissinger

“A government which robs Peter to pay Paul can always depend on the support of Paul”. George Bernard Shaw

“The budget should be balanced, the treasury refilled, public debt reduced, the arrogance of officialdom tempered and controlled, and the assistance to foreign lands curtailed, lest Rome becomes bankrupt”. Cicero, Roman Statesman (106 B.C.-43 B.C.)